I’m a beginner in all things Arduino and I’ve been working on an easy, fast, and cheap project to learn more about it. 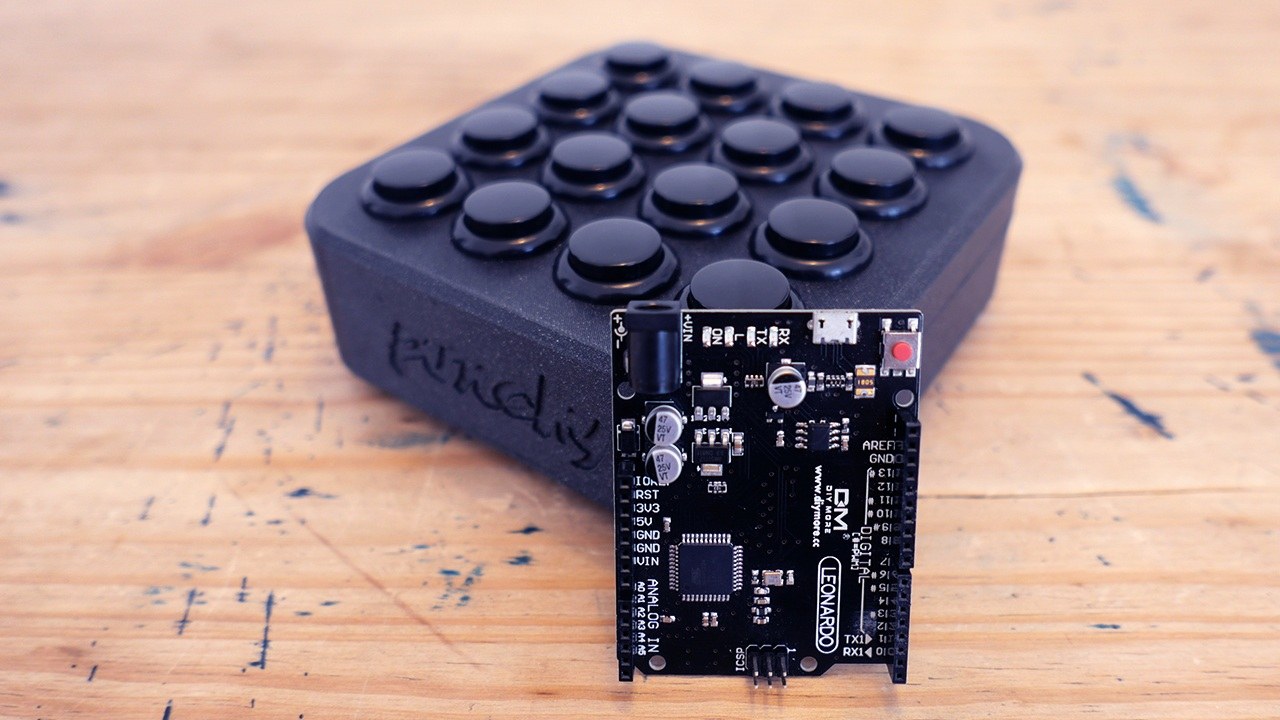 I enjoy building stuff that includes electronics, and I always wanted to build something using Arduino.

One of the most common builds for beginners I found was a MIDI controller. A MIDI controller is any hardware that sends MIDI data (Musical Instrument Digital Interface) to a device to trigger sounds and make music.

I found that many implementations are complicated, even those that are for beginners. It was very frustrating to find I need to use hundreds of lines of unreadable code. Or that I need to solder a resistor in some cases, among other examples.

By building my own Arduino MIDI Controller, I intended to do an enjoyable project, keeping the noise at the lowest. Something any beginner could follow. To accomplish that, I used the MIDI Fighter 3D as a base inspiration and removed every non-essential feature.

The total cost of my project was under $30, and the list of materials was concise (affiliate links):

Take a look at how was the experience building this controller:

When I started this project I found many new Arduino models (not including the hundreds of compatible boards). And all of them offer slightly different capabilities.

I needed to send MIDI signals to a computer, and the simplest way to do that is through USB. Any Arduino board based on the ATmega32u4 microcontroller has built-in USB communication.

The official Arduino boards with native USB support are Arduino Due, Arduino Zero, Arduino Leonardo, Arduino Micro. These boards have integrated USB support, which means they can act as a USB MIDI device.

I decided to go with a clone of the Arduino Leonardo. It has enough inputs for this project, and it also includes headers, which makes it easier to plug/unplug wires.

Although I’ll explain step-by-step how I implemented the code for this project, you can download the final version.

To upload code to the board, you need to use the Arduino IDE. They also have a handy Web editor, but they have a limited quota on times per day to compile code.

It’s funny how the «Hello World» in the world of hardware is blinking an LED.

It was a pleasant surprise for me to discover that Arduino Leonardo has a built-in LED that you can blink to test your code. That way, you don’t need to build an external circuit on a breadboard with an LED and a resistor.

Step 2. Blinking the LED on a manual input

The next logical step was to blink the same LED whenever I send some signal. I removed the plastic cover of one end of 2 Dupont wires, and connected the other end to the board:

Every time I join the wires’ exposed ends, I’m closing the circuit, and thus I can execute code in consequence.

Each of the 20 digital pins on the Leonardo has an internal resistor (disconnected by default) that can be enabled using INPUT_PULLUP . Keep in mind that a pull-up input means the button state is inverted:

This library allows an Arduino board with USB capabilities to act as a MIDI instrument over USB. Check the official documentation for more info.

Now the Leonardo can send MIDI messages via USB! But first, some insight into how MIDI works is needed.

It handles event messages with data of the pitch and velocity of the note played, among other instructions.

In this specific project, the input from the 16 buttons sends different messages via USB. These messages can be converted into sound on a computer using any suitable software like GarageBand or Ableton Live.

Anatomy of a MIDI message

To send a MIDI message, I used the sendMIDI() method from the MIDIUSB Library I installed on step 3.

This method can receive four parameters:

I included the MIDIUSB Library, and instead of blinking the built-in LED, I sent a note.

The Arduino turns into a MIDI USB Controller from this step onwards, and it stops receiving code via USB.

When you get stuck in a position where you can no longer program the Arduino, follow these steps:

Step 5: Sending a MIDI message from each button

The final step was to map every pitch to a button. For the 16 buttons, I defined a scale from C2 to E3b, which are the pitches from 36 to 51 in a sequence from bottom to top and left to right. Check out this file from Arduino Tutorials to see what pitch corresponds to each note.

And this is how the final code looks like:

You can use those extra buttons to update a variable in the code and send its value as a parameter to the MidiUSB.sendMIDI method:

To keep this project simple, I was too picky choosing which features to include.

One of the challenges I faced was designing a case simple enough that it doesn’t need assembly and can be 3d printed in one single run.

To avoid using screws or glue, I needed to design an enclosure that provides the smallest access to the electronics. My biggest inspiration for the enclosure was the Mac Mini, which has a circle-shaped hole at the bottom. I also wanted to design a screwable lid for that, but I decided to let it open to expose the electronics. 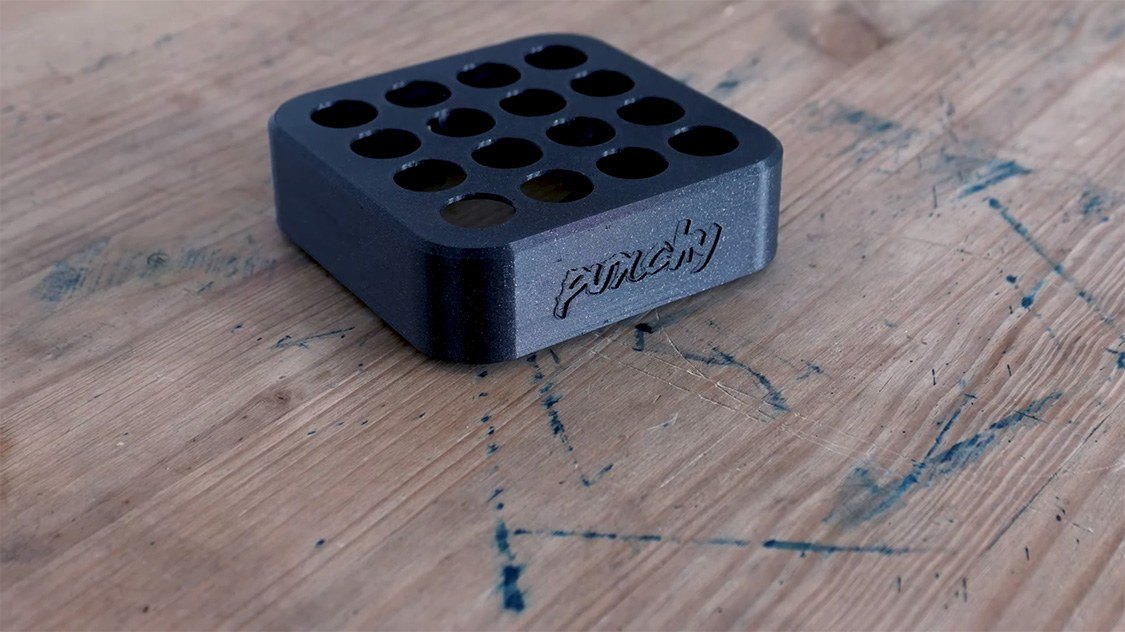 These are the dimensions (in millimeters) used for the 3d printed case: 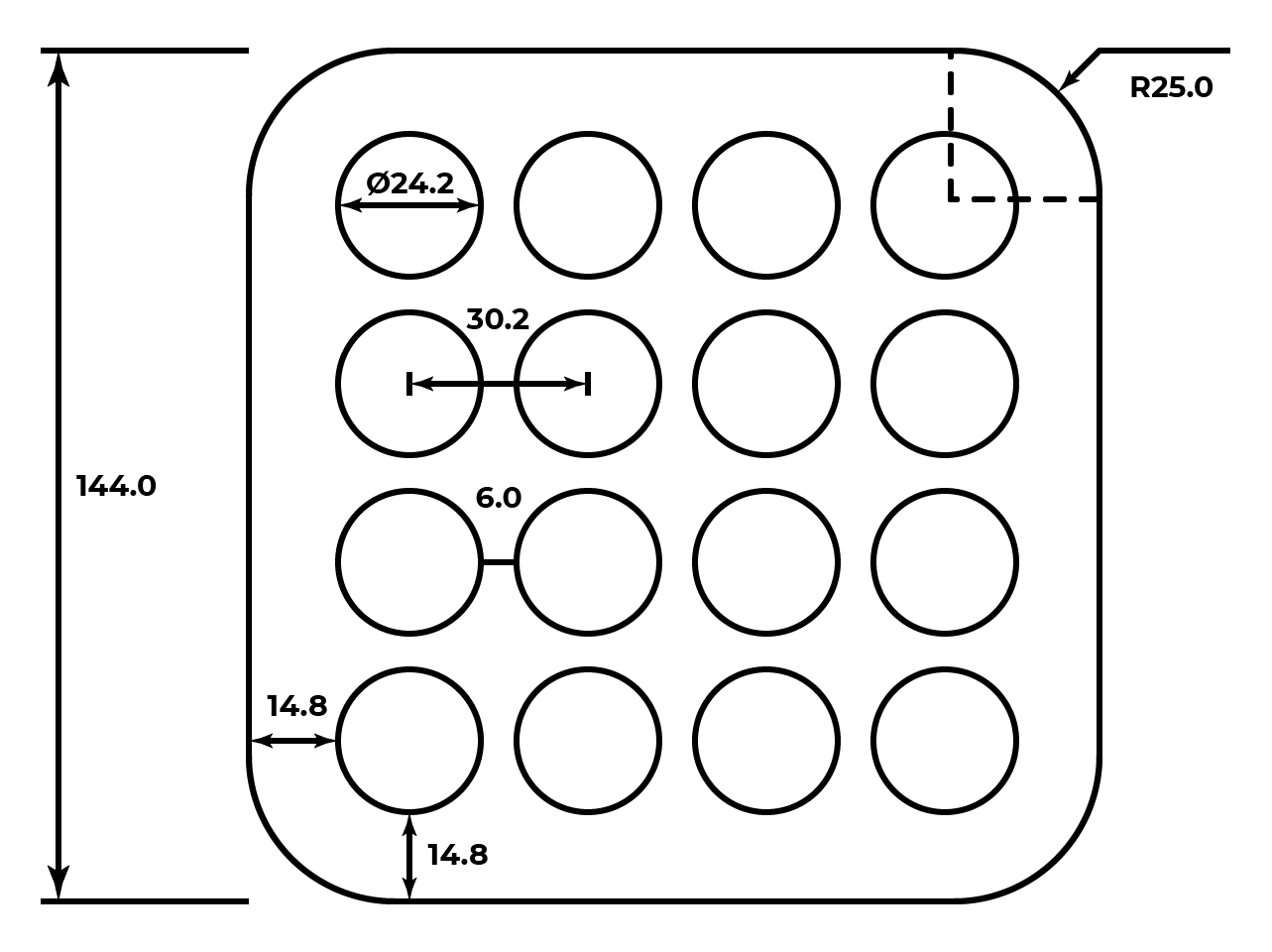 Holding an Arduino with no screws

The Leonardo has four holes to screw the board into any suitable case, but my idea was to make it easy to add and remove the board from the case.

Finding a clip holder for Arduino on Thingiverse was easy, and it took me five iterations to integrate that holder into the unibody design. The most challenging part was making its legs avoid the holes for the buttons and make the micro USB center aligned to the case. 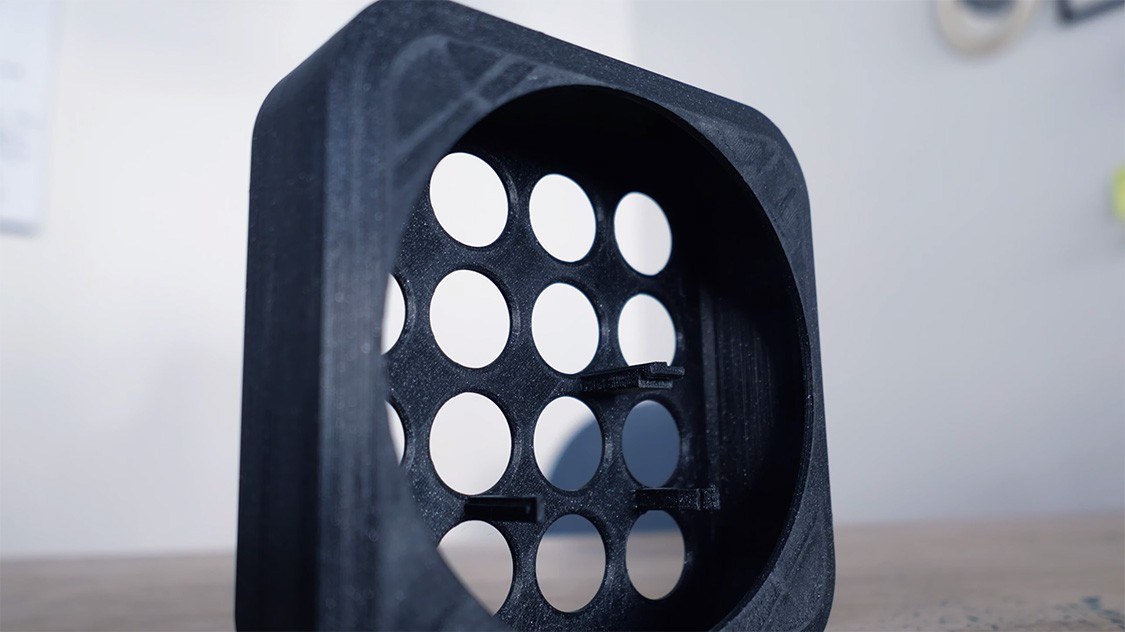 Here is the wiring diagram for the MIDI Controller: 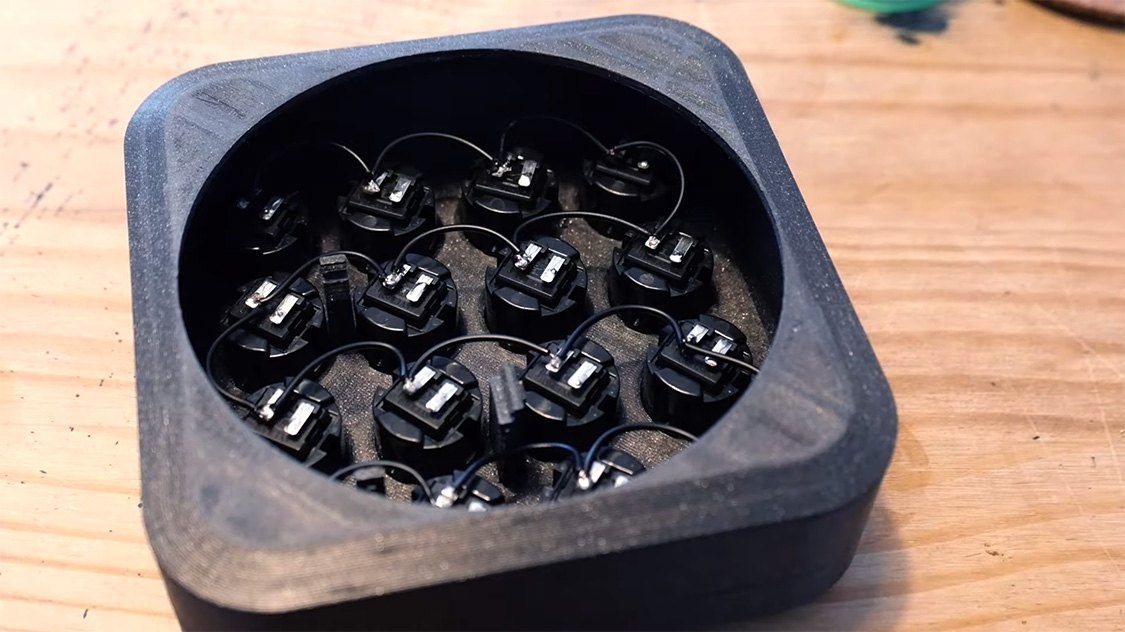 Then I soldered long red wires from each positive leg to connect directly to the board. 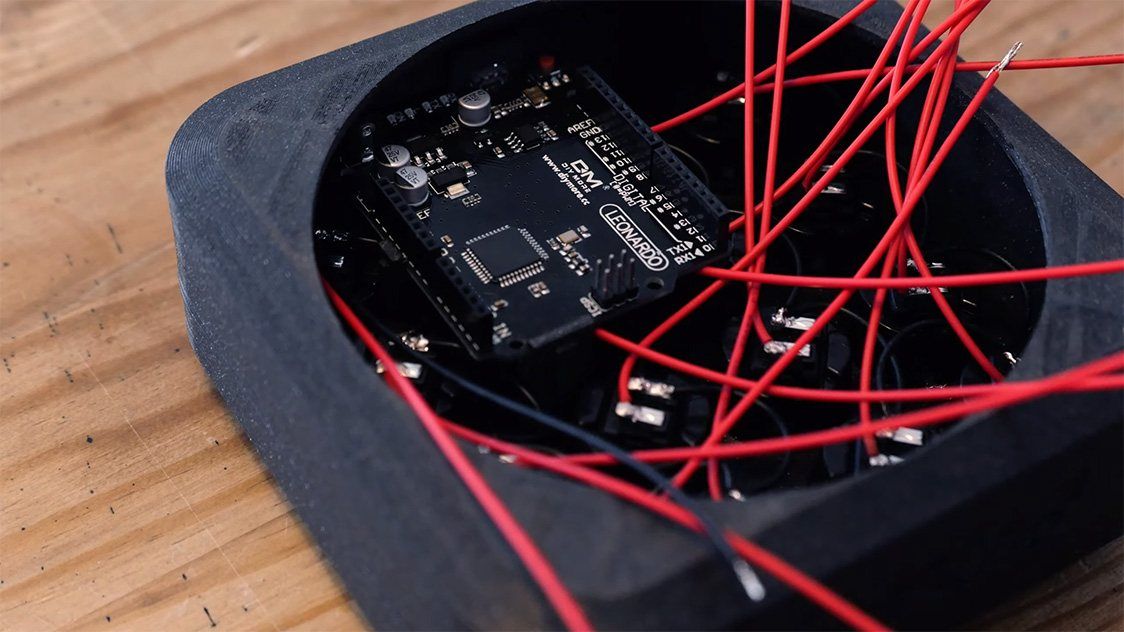 I cut and soldered some Dupont ends and covered them with heat-shrink tubing to connect the wires to the Arduino. 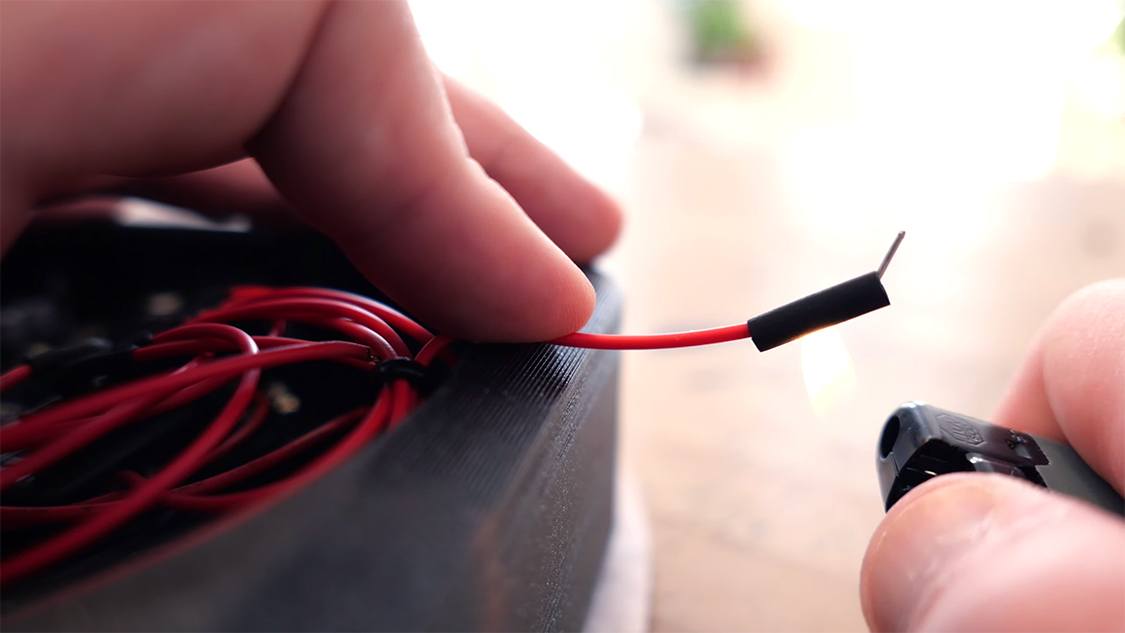 I connected the wires to the board following the same order as in the MIDI Fighter. From bottom to top and from left to right. 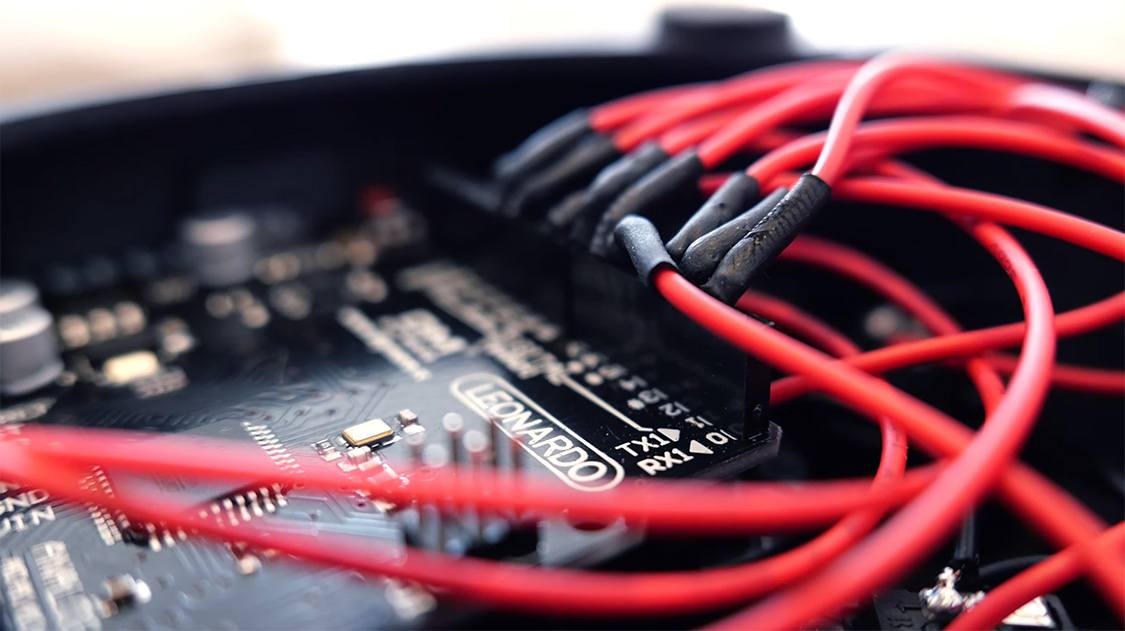 You can use any music software (or suitable hardware) to receive MIDI and make some music. The most recommended ones are Garage Band, Ableton Live, and I know there are a bunch of apps to install on a phone.

All those tools are useful for loading predefined sounds for finger drumming, but they were made for bigger purposes. Those tools can be tough for beginners to set up.

MIDI in the Web browser

To make something more aligned with this project and its simplicity, I built a Web tool completely focused on MIDI controllers.

It can read MIDI messages on any browser that supports the WebMIDI JavaScript API. Then it plays sounds in a synthesizer (using the WebAudio API) or in a sampler, loading custom sounds from any sound pack.

To make the MIDI Controller work with Ableton Live, follow these simple steps from their official documentation.

Go to Preferences → Link MIDI and make sure the «Input» has «Track» and «Remote» ON and the output has «Remote» ON as well as mentioned in the guide: 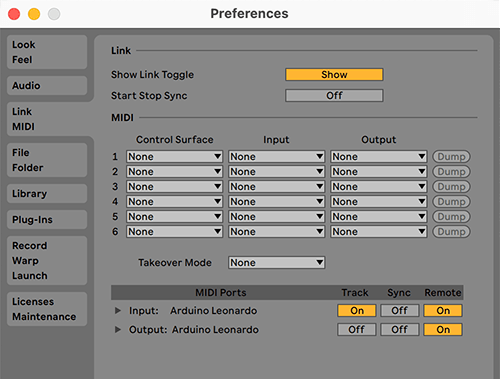