This distribution contains an Arduino-based solution for programming PIC microcontrollers from Microchip Technology Inc, such as the PIC16F628A and friends. The solution has three parts:

See the documentation for more information on the project.

The sources for Plang are available from the project git repository. Then read the installation instructions.

For more information on Ardpicprog, to report bugs, or to suggest improvements, please contact the author Rhys Weatherley via email. Patches to support new device types are very welcome.

Creating a Serial PIC Programmer from an Arduino (Part 1)

A while back I bought a couple of PIC16F57 (DIP) chips because they were dirt cheap. I figured someday I could use these in something. Yes, I know, this is a horrible way to actually build something and a great way to accumulate junk. However, this time the bet paid off! Only about a year or two too late; but that’s beside the point. The problem I now had was that I didn’t have a PIC programmer.

When I bought these chips I figured I could easily rig a board up to the chip via USB. Lo and behold, I didn’t read the docs properly; this chipset doesn’t have a USB to serial interface. Instead, it only supports Microchip’s In-Circuit Serial Programming (ICSP) protocol via direct serial communication. Rather than spend the $40 to buy a PIC programmer (thus, accumulating even more junk I don’t need), I decided to think about how I could make this happen.

Glancing at some of my extra devices lying around, I noticed an unused Arduino. This is how the idea for this project came to life. Believe me, the irony of programming a PIC chip with an ATMega is not lost on me. So for all of you asking, «why would anyone do this?» the answer is two-fold. First, I didn’t want to accumulate even more electronics I would not use often. Second, these exercises are just fun from time to time!

My prototype’s hardware design is targeted to using an Arduino Uno (rev 3) and a PIC16F57. Assuming the protocol looks the same for other ICSP devices, a more reusable platform could emerge from a common connector interface. Likewise, for other one-offs it could easily be adapted for different pinouts. Today, however, I just have the direct design for interfacing these two devices: 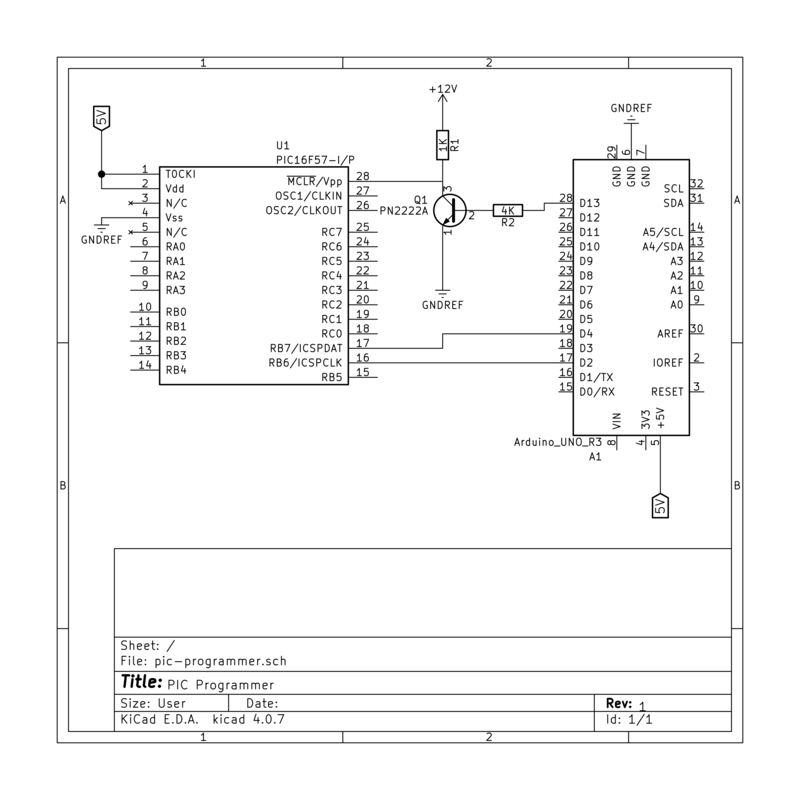 Overall, the design can’t get much simpler. For power I have two voltage sources. The Arduino is USB-powered and the 5V output powers the PIC chip. Similarly, I have a separate +12V source for entering/exiting PIC programming mode. For communication, I have tied the serial communication pins from the Arduino directly to the PIC device.

The most complicated portion of this design is the transistor configuration; though even this is straightforward. I use the transistor to switch the 12V supply to the PIC chip. If I drive the Arduino pin 13 high, the 12V source shunts to ground. Otherwise, 12V is supplied to the MCLR pin on the PIC chip. I make no claims that this is the most efficient design (either via layout or power consumption), but it’s my first working prototype.

Serial Communication with an Arduino

The first task to managing our own serial communication with the Arduino is to select an appropriate clock speed. The key to choosing this speed was finding a suitable trade-off between programming speed (i.e. fast baud rate) vs. computation speed on the Arduino (i.e. cycles of computation between each clock tick).

Remember, the Arduino is ultimately running an infinite loop and isn’t actually doing any parallel computation. This means that the amount of time it takes to perform all of your logic for switching data bits must be negligible between clock ticks. If your computation time is longer than or close to the clock ticking frequency, the computation will actually impact the clock’s ability to tick steadily. As a rule of thumb, you can always set your clock rate to have a period that is roughly 1 to 2 orders of magnitude than your total computation.

Taking these factors into account, I chose 9600 baud (or a clock at 9.6KHz). To perform all the logic required for sending the appropriate programming data bits, I estimated somewhere in the 100’s of nanoseconds to 1’s of microseconds for computation. Giving myself some headroom, I selected a standard baud rate that was roughly two orders of magnitude larger than my computation estimate. Namely, a period of 104 microseconds corresponds to a 9.6KHz clock.

After completing the project I could have optimized my clock speed. However, that was unnecessary for this project. The clock rate I had selected worked well. The 9600 baud rate is fast enough for timely programming the device because we don’t have much data to transmit. Similarly, it provides us a lot of headroom to experiment with different types of computation.

While this discussion has primarily focused on the design decisions involved in choosing a clock signal rate, how did we generate it? The process really comes down to toggling a GPIO pin on the Arduino. In our specific implementation, I chose pin 2 on the Arduino. While you can refer to the code for more specific details, an outline of this process follows:

This projects enables programming PIC devices using Arduino only i.e. it should (in ideal cases) replace pickit and other programming devices. It currently only supports a very small number of devices which are PIC16F87XA family and uses Low voltage programming mode for obvious reasons. It should be able to work with some other devices as well but that is not guaranteed. Also, this only supports HEX files of Intel HEX format (which is the most common format, I believe).

Support for more devices should be added in the next updates.

All you need to start using this project is:

Next thing is you get the sketch file and the hextoserial.py file from this project, upload the sketch to the arduino using the IDE, connect the Arduino to the PIC as described in the beginning of the sketch. Now run hextoserial.py in your environment. You will be asked for the name of the port where the arduino is connected. After entering it you will be asked to enter the full path of the hex file. Then it asks you to enter P for programming, V for verification or D for verification with debugging, You should start by Entering P then after the programming is done enter V.

If the programming was done correctly the verification process shouldn’t produce any error messages and end with «Verification done», otherwise you will get an error message saying verification failed. You may then try reprogramming by entering P or verify with debugging using D to show you the difference between the file and the data it reads from the chip.

After you are done stop the process in the console, this should close the serial communication with the arduino and close the hex file.

Here is a circuit diagram of the connection: Make sure you put a 10K resistor on the MCLR pin and a 100nF capacitor to the ground as shown above.

Connecting the arduino to the computer and uploading the sketch, then running the python file:

Entering the communication port and the path to the hex file:

Choosing P to program then V to verify programming:

And that’s it. Now connect the pic in its normal connection or if it is on a board remove the connections to the arduino and restart. 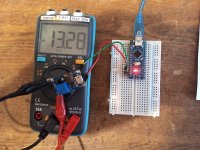