How to connect ESP32 to Arduino IoT Cloud

Arduino IoT Cloud is Arduino’s attempt to tap the growing IoT market. It offers integration with several Arduino IoT boards, and also some third-party boards like ESP8266 and ESP32. In this tutorial, we will see:

The steps mentioned in this tutorial can be replicated for any other board as well.

You should have an ESP32 board (or ESP8266 or one of the Arduino IoT boards). You should be familiar with basic Arduino programming.

Additionally, you should have created a free Arduino IoT Cloud Account. That’s pretty much it.

What is a thing? It is an IoT node – an independent unit that will sense some physical quantity (temperature, humidity, etc.), and send the measurements to the Arduino IoT Cloud. Let’s create one.

Click on the ‘CREATE THING’ button. You should see a screen similar to the one below: 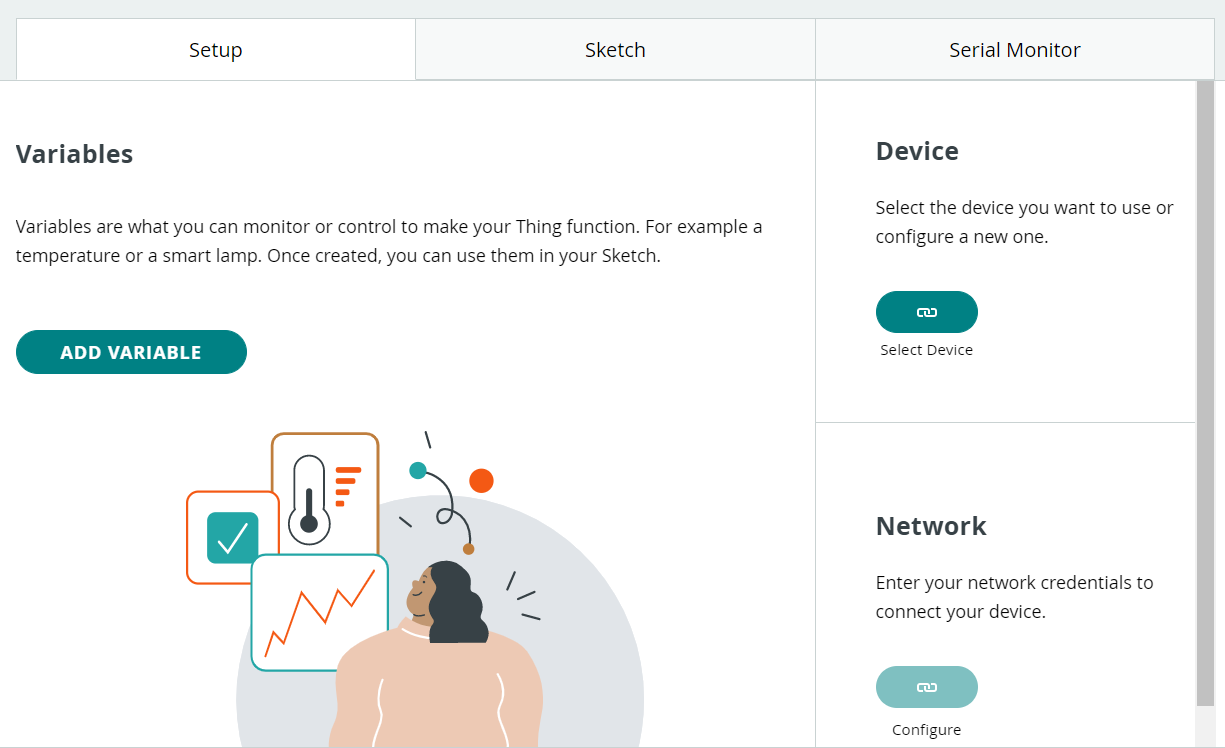 Set up the Device

Click on ‘Select Device’ button in the Device Section. A popup will open up, similar to the one shown below. 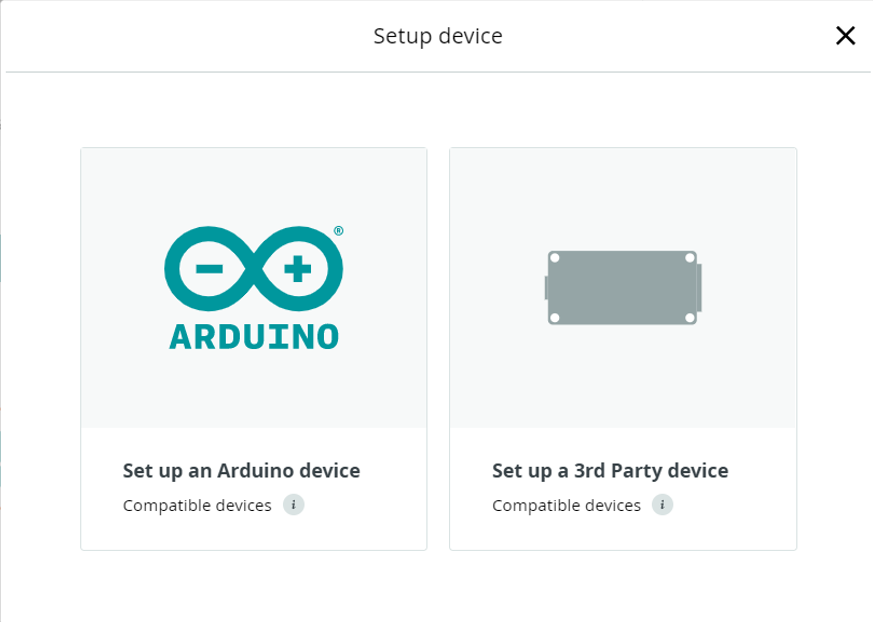 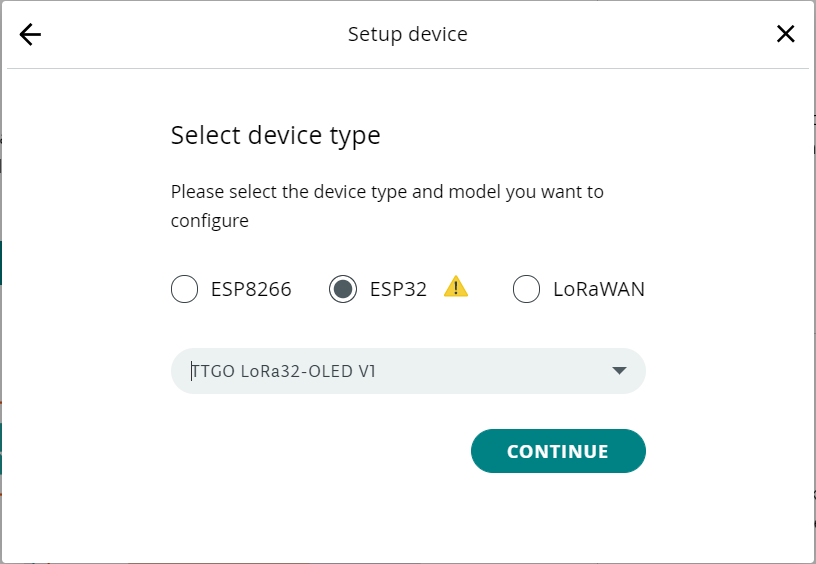 Click on ‘CONTINUE’, give your device a name and click on ‘NEXT’. The next screen that opens up is quite important. You are given the Device ID and SecretKey. The SecretKey is available only once. So please note it down. You can also use the ‘download PDF’ option that is shown in the popup. Once you have noted the SecretKey/ downloaded the PDF, tick the check box stating so, and click ‘CONTINUE’ 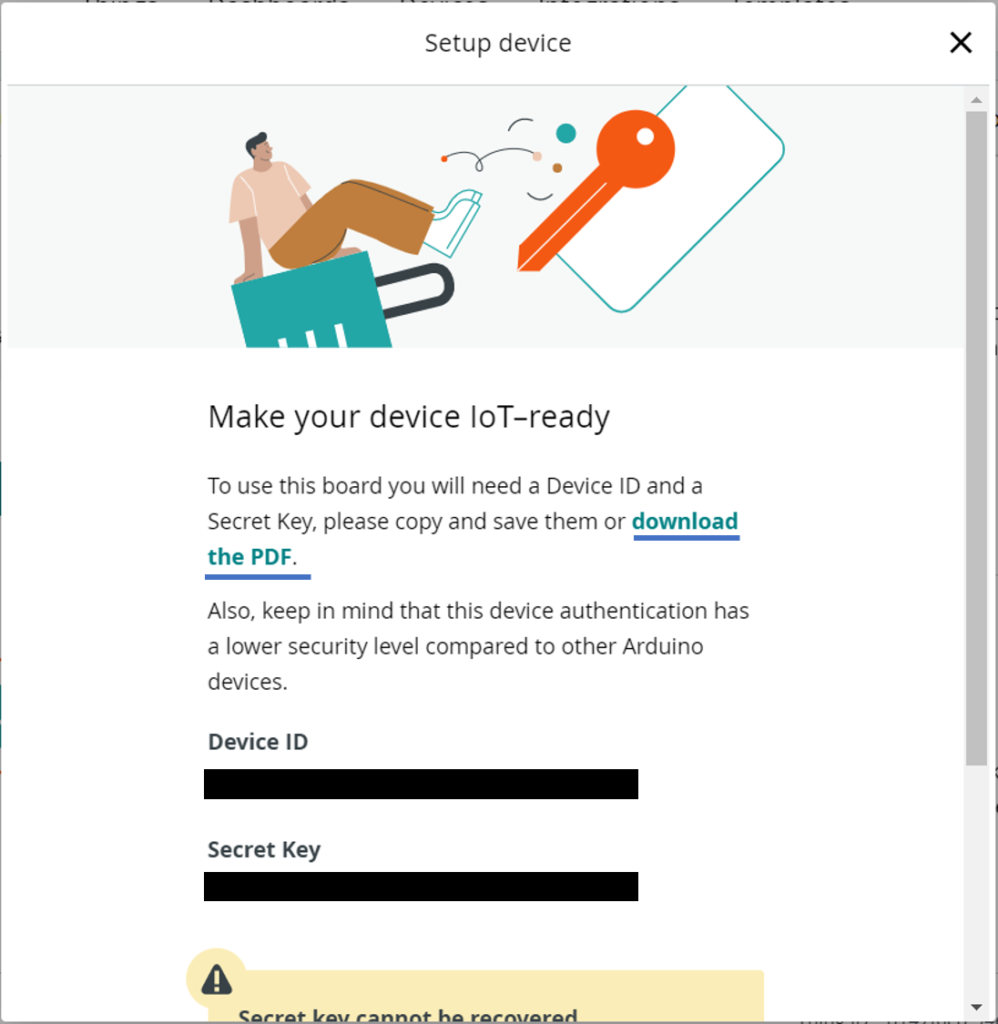 With this, your device is set.

What are variables? They correspond to the quantities being sensed. Every IoT device measures some physical quantity (temperature, humidity, location, heart rate, etc.), and sends the data to the server. On the Arduino IoT Cloud, these quantities of interest can be defined as variables. Defining variables is important as Arduino will do most of the work for us once the variables are generated, in the Auto-generated code. We’ll see that shortly.

Click on the ‘ADD VARIABLE’ button, and configure any variable that your ESP32 will measure. For now, I’ll set a variable named ‘temperature’ of type ‘Temperature Sensor (Celsius)’, mimicking the case when a temperature sensor is connected to the ESP32. It’ll be kept Read-only, i.e., the Cloud can only read the value of this variable from the device, and not send a new value to the device. I’ll configure the variable update policy such that the variable’s value will be sent to the Cloud whenever it changes by at least 1 degrees Celsius. 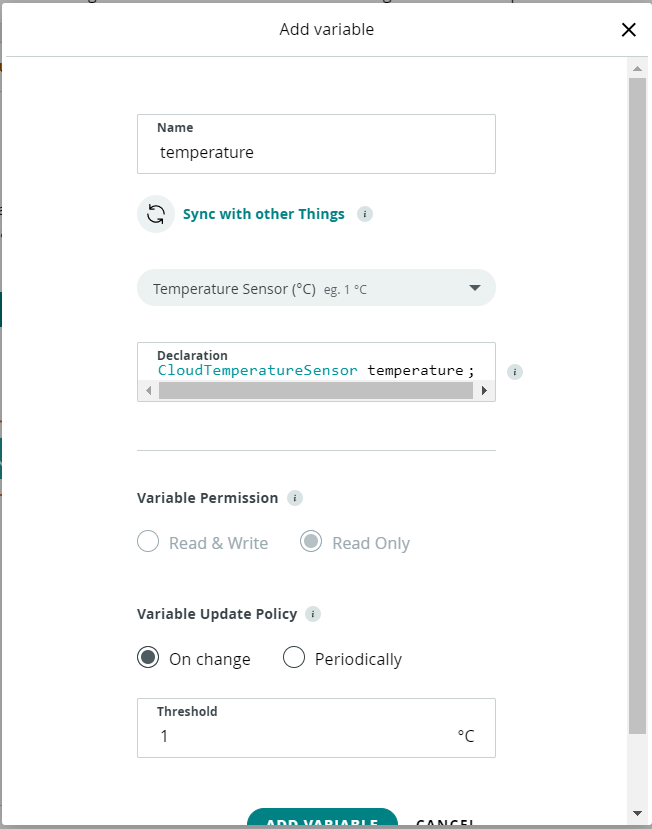 Once done, click on ‘ADD VARIABLE’. You can similarly add more variables. I’ll keep only one variable for now.

Click on the ‘Configure’ button in the ‘Network’ tile. A popup will show up, where you will be asked to enter the SSID and password of the network that your device will connect to. Enter these details. You will also be asked for the SecretKey, which you noted down in the ‘Set up the device’ step. Once these details are entered, click ‘SAVE’

That’s it. You have successfully configured your thing. Now let’s move on to the next part.

Part 2 – Program the board

Move on to the ‘Sketch’ tab. You will see the auto-generated code in the text editor, along with the familiar ‘Verify’ and ‘Upload’ buttons.

While you can edit the code on this screen itself, I personally prefer to use the Arduino Online Editor. Click on the ‘Open Full Editor’ button. That should open up a new tab, showing the code in Arduino Online Editor (you may be asked to re-login to the editor). You should be able to see a screen similar to the one below.

You will be able to see 3 files (apart from the ReadMe):

Now, we will make a small edit. In the loop, we will set the temperature to increase by 0.5 and reset to 0 if its value crosses 200. We will also introduce a 1-second delay in the loop. Ideally, the temperature should come in from a sensor, and you should make edits to the code to read values from the sensor.

You can now hit the ‘Verify’ button to make sure that your sketch is getting compiled without any bugs.

In order to program the board using the web browser, you will need to install the Arduino Create Agent. Click here and follow the steps to download and install the agent on your machine. Once you are done, you should be able to see the Arduino Create Agent Tray Icon. Also, the COM Port will be shown along with the board in the Arduino Online Editor. You may want to refresh once if the COM Port doesn’t show immediately, and you might have to click the dropdown and select the COM Port manually in case you have multiple peripherals connected.

Now, you can click on the Upload button (->) and the sketch should start getting uploaded. You can check the status in the terminal at the bottom.

Next, you can click on the Serial Monitor from the left pane, to see the serial print statements. 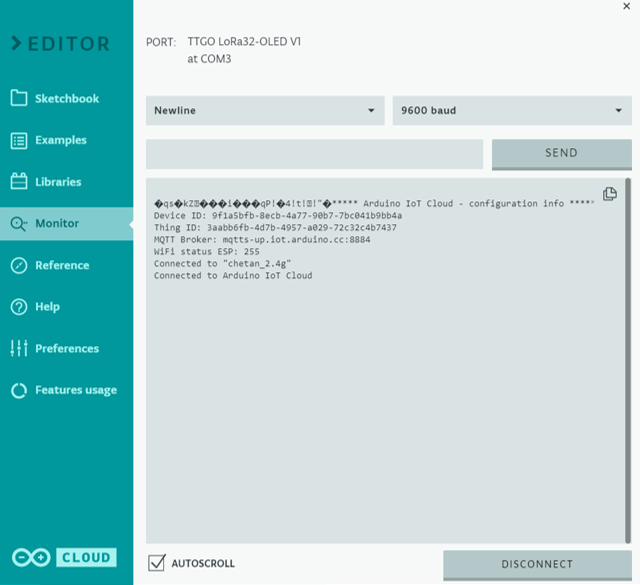 Part 3 – Visualize the incoming data on a dashboard

We will create a very simplistic dashboard here. Go to the Arduino IoT Cloud, and click on ‘Dashboards’ from the top menu, and click on ‘BUILD DASHBOARD’

Click on the Edit icon, then click on the ‘Add’ dropdown, go to the ‘Things’ pane, and select your thing. 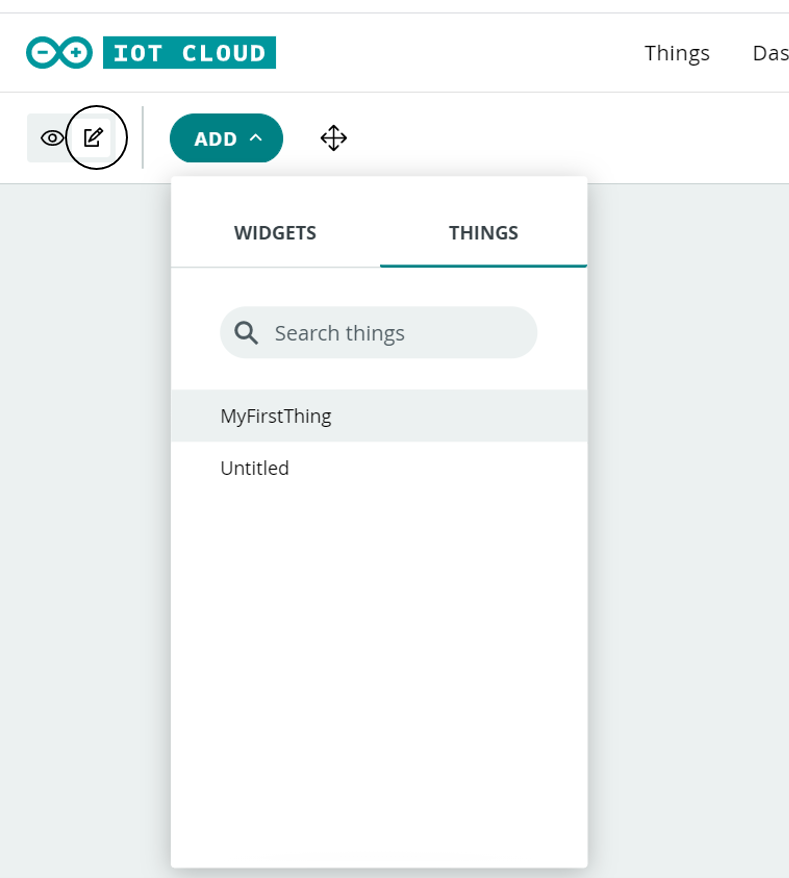 Click on ‘CREATE WIDGET’ in the popup that opens up, and you should start seeing the data getting updated realtime (provided your thing is powered ON).

That’s it. Congratulations on successfully linking your ESP32 to the Arduino IoT Cloud, and displaying the data on a dashboard.

Since you are here, you may find this course on Udemy, which explains how to link ESP32 with AWS IoT, to be quite interesting. An introductory article on linking ESP32 to Arduino IoT Core can be found here.

In this smart home IoT project, I have explained how to make an Arduino Cloud ESP32 Alexa home automation system to control appliances with the internet from anywhere in the world. With this internet of things project, you can control 4 relays from Arduino IoT Cloud dashboard, Alexa, IR remote, and manual switches. You can also monitor the real-time room temperature in the Arduino cloud dashboard and Amazon Alexa app. If there is no internet available still, you can control the appliances from the IR remote and switches.

I have used all the FREE tools and you don’t need any Alexa devices or Amazon Echo Dot for this voice control smart home IoT project. So if you follow all the steps, you can easily make this Home Automation System with Arduino IoT Cloud and ESP32 for your home. And the GPIO D13, D12, D14 & D27 connected with pushbuttons to control the relay module manually.

I have used the INPUT_PULLUP function in Arduino IDE instead of using the pull-up resistors with each push button.

I have used a 5V 5Amp mobile charger to supply the circuit.

In the Arduino Cloud tutorial video, I have covered the following steps in detail.

For this IoT project, I have used the Arduino Cloud Free plan.

First, you have to add ESP32 devices in Arduino IoT Cloud.

Then you have to add 4 Alexa Compatible Switch variables and 1 Temperature sensor variable to the Arduino Cloud Thing.

Important points for the ESP32 internet of things project:

In the Tutorial video, I have explained all the steps to program the NodeMCU using Arduino IDE.

Go to Sketch -> Include Libraries -> Manage Libraries in Arduino IDE.

When you try to install the ArduinoIoTCloud library, it will ask you to install all the dependencies. Then Click on Install All.

After uploading the code to ESP32, please refer to the following articles for connecting the Arduino IoT Cloud Account with Amazon Alexa App.

After doing all these steps, now you control the appliances with Alexa.

If the ESP32 is connected with WiFi, then you can ask Alexa, to turn on the light [“Alexa, Turn ON Room Light”]. Thus, you can control the appliances like lights, fans, etc with voice commands using Amazon Alexa App from anywhere in the world.

You can also monitor the real-time feedbacks and room temperature in the Alexa app.

You can also control the relays and monitor the room temperature from Arduino IoT Cloud Remote App.

Just download and install the Arduino IoT Cloud Remote app from Google Play Store or App Store, then log in to your Arduino Cloud account and select the dashboard.

Sometimes you have to refresh the dashboard multiple times if you face any issue.

You can also control the appliances with any IR remote.

First, you have to get the HEX codes of the remote buttons, then update the HEX code in the code. That’s it. Now you can control the appliances with the IR remote.

PCB for the ESP32 IoT Projects You can also use this PCB for this ESP32 IoT project. Just download the Gerber file and order the PCB from any PCB manufacturer.

I hope you like this Smart house IoT projects idea with the Arduino Cloud ESP32.

Please do share your feedback on this IoT project. Thank you for your time.