So, I’ve made a video with some radio modules you could use. In this case we will see the CC1101 radio module with SPI serial communication. See the connections below, download the example code and test if it works. You will need the ELECHOUSE_CC1101 library as well so download that from the links below. You need two modules, an LED and a potentiometer and we will send just one byte of data, 0 to 255 values. The range for this module could be up to 400m abut we need a lot of pins to use this. 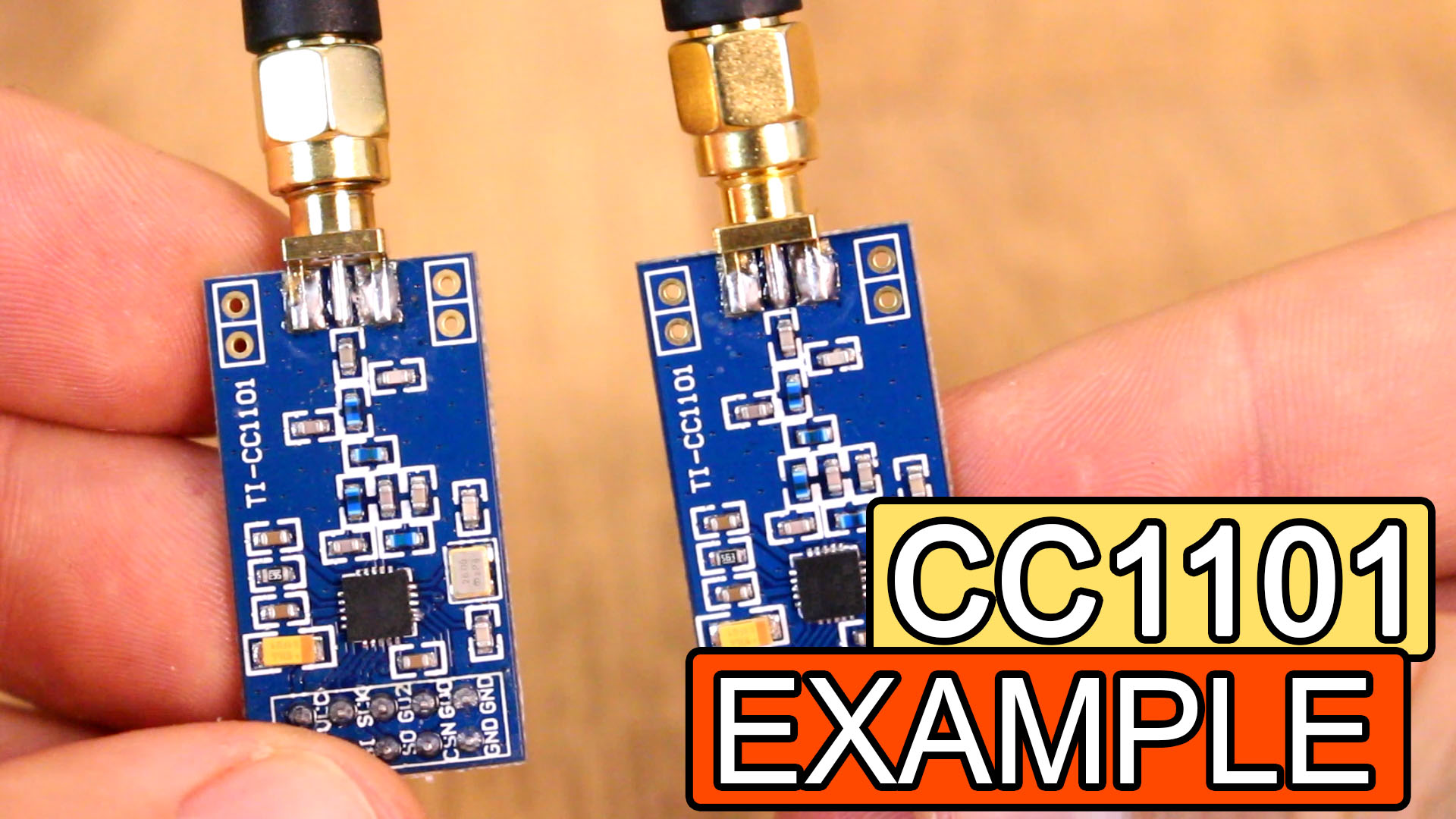 Ok, guys let’s move to the CC 11 01 radio module. There are different modules with different frequencies. The frequencies can also be modified. The most popular and also the most used band is the 70 cm band. Again, the module is used via the SPI interface. You might find that the module can not be connected directly to the SPI pins because of the 3.3 Volts operating voltage. And basically this is true, however, during my test I’ve used this with my Arduino and I had no problems. It has a maximum operating speed of 500KB per second and according to the user manual, it could send data up to 500 meters but that depending on the environment, the antenna and baud rate. There are also some small power amplifiers that you could use to increase the transmission power by up to 5 watts. With power amplifiers, you can get over 15 kilometers according to some internet posts I’ve found. 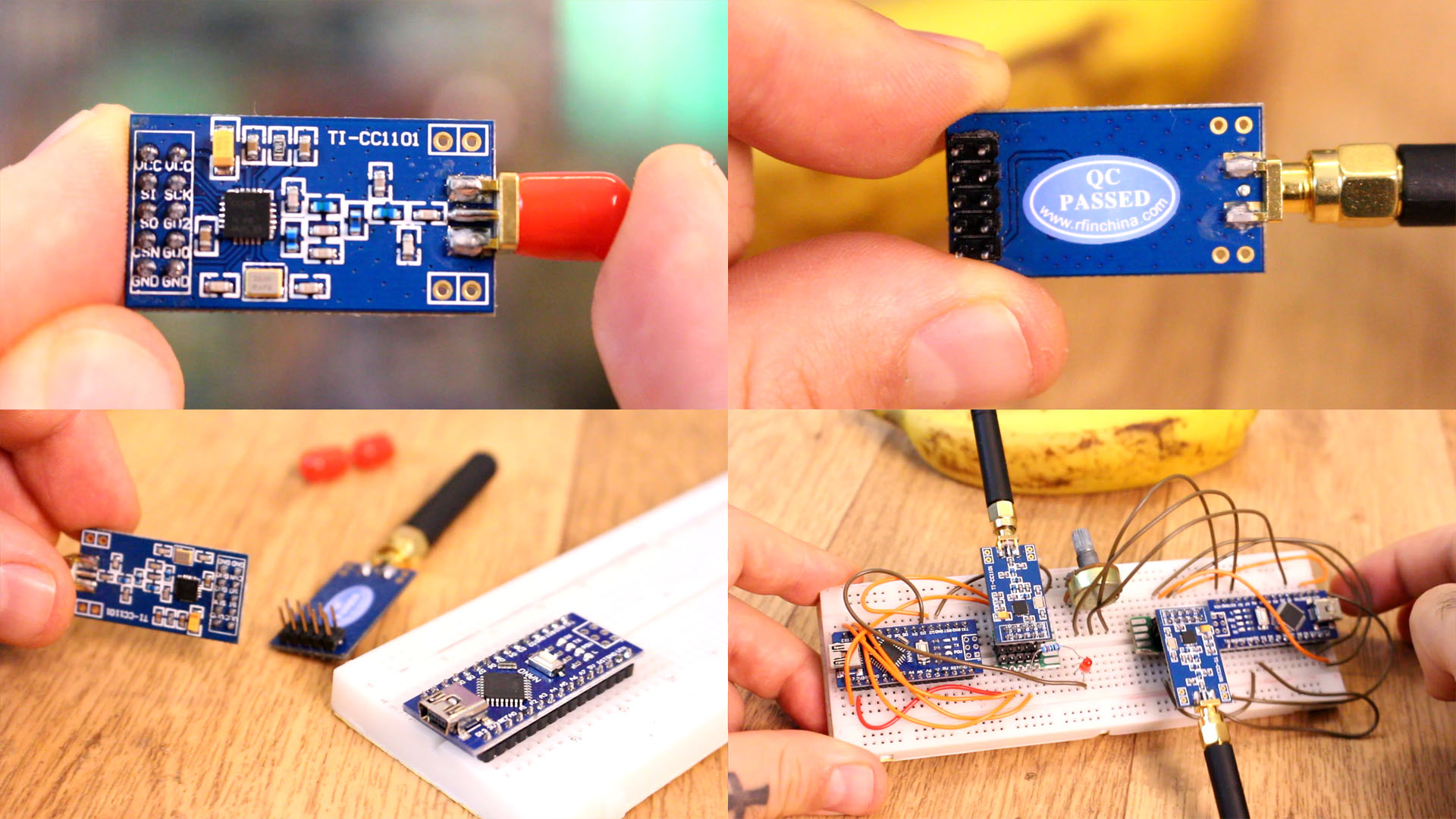 For this module you will need the CC1101 library you will find below in the code link. Make the connenctions for the modules as in the schematic. For breadboard connection you will need a jumper like the one I’ve made with some female and male pins. Download the example code from below and upload those to the Arduinos. You have the transmitter and receiver examples and again, the transmission is working and I can control the LED using radio connection.

The schematic is simple but with a lot of pins. We have 2 Arduino NANO and we will use 3.3V from the Arduino in this case. If this doesn’t work, connect an external 3.3V supply and share ground. Anyway, connect the SPI pins and add a potentiometer, and LED and a resistor. Upload the codes below to the transmitter and receiver and read the comments in the code for more. Test if it works and you could change the brightness of the LED using the radio connection. 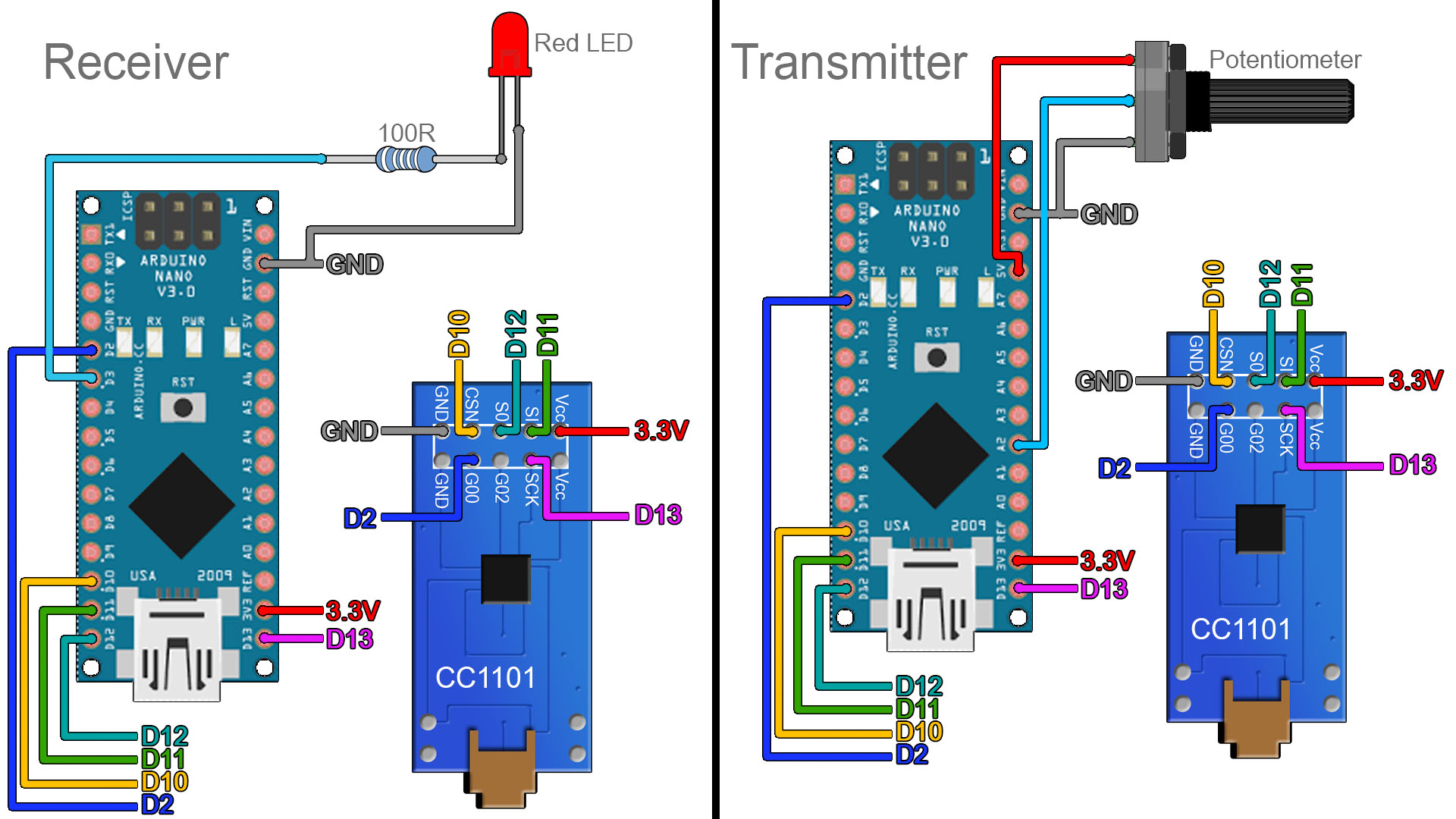 Here we have the transmitter code. You will need the ELECHOUSE_CC1101 library for this module so download that from the code link below and install it to the Arduino IDE. Uplaod this code to the Arduino with the potentiometer. Read the comments in the code for more. Copy or download the code from below.

A clone of the ELECHOUSE_CC1101 http://www.elechouse.com library updated for Arduino 1.0 plus.

I made the following changes to the original library.

Connecting an Arduino to a CC1101

These instructions are for an Arduino Uno. To install the library into your IDE:

This is a very easy library to use. You may just wish to try out the examples, that send a text message from one Arduino to another using the Serial Monitor. But for completeness, here it is:

Put this in your setup function.

Put this in your setup function and call again, any time after you have processed a received message.

When a new message arives GD0 on the CC1101 (Arduino pin 2) will be set LOW. You can hook this up to an interrupt or just watch for it in your loop function.

The maximum data size is 64 bits.

ReceiveData requires a buffer of type byte[] and returns the number of bytes contained in the message.

The maximum data size is 64 bits.

SendData requires a buffer of type byte[] and the number of bytes contained in the message.

If you are happy with the library and you want to spend me a beer, please feel free to use the following link. ;)

pkt_len = count of bytes which shall transfered over air (rx_addr + tx_addr + payload data)
rx_addr = address of device, which shall receive the message (0x00 = broadcast to all devices)
tx_addr = transmitter or my address. the receiver should know who has sent a message.
payload = 1 to 60 bytes payload data.

use uint8_t CC1100::begin(volatile uint8_t &My_addr) always as first configuration step. For Arduino devices, this function returns the device address, which was already stored in the Arduino EEPROM.

the following modulation modes can be set by void CC1100::set_mode(uint8_t mode). Transmitter and receiver must have the same Mode setting.

you can set a frequency operation band by void CC1100::set_ISM(uint8_t ism_freq) to make it compatible with your hardware.

CC1101 RF settings must be stored in the Arduino EEPROM to have maximum flexibility with different mode settings and reduced memory usage. Follow the following steps, how to store the compiled EEPROM file (*.eep) to your Arduino EEPROM. From my experience, you have to repeat this step only, if you have changed the Arduino Version, because the gcc compiler defines the location of the eeprom settings.

How to compile Raspi Demo files

be sure first, that you have already wiringPi installed on your Raspberry Pi hardware.

No need to install anything. In platformio.ini just add :

The pins depend on platform and SPI bus. See the examples.

Most of the functionality explained in the examples but here is some code (platformio) :

or if GDO0 is connected, use getPacket only when needed :

Every example is a separate tiny platformio project and can be opened by platformio IDE. The CC1101_RF library will be imported automatically.

Some things to keep in mind :

If however you prefer to code:

If you code with platformio, you need to adjust the serial ports inside platformio.ini

Even some seemingly innocent changes in register CC1101 settings can break the library. It is recommended to use a target with debugging support. This can be :

there is a var CC1101_DEBUG which can be enabled by editing the CC1101_RF.cpp file or preferably in platformio.ini

even if you can find multiple unrelated things to fix/improve, please focus on one each time.

Follow some tutorial about contributing to a github project like this one, or any other you may prefer.

Look at the source code. The examples contain comments for the most useful functions.

Capabilities of the chip

CC1101 at 4800bps and 10dbm can penetrate easily 3-4 reinforced concrete floors, or a few hundred meters without obstacles using simple modules with pre-soldered spring antennas. This is more than enough for many projects. Of course LoRa devices can do better but there is no compelling reason to use them if the project does not need such capabilities. Given the lower price, the easier pin connections (at least for the modules found on ebay/aliexpress), and the capability of the same chip to use all sub-GHz ISM bands, means the CC1101 chip is quite useful, despite being more than 10 years old.

Most projects do not require high data rate. for those projects the default (4800bps) is OK.

The frequency selection usually needs more attention. The frequency must be inside one ISM band, if we talk about a project not requiring gevernment permission !

Let’s say we configure the module for 433.2Mhz. The CC1101 chip (all RF chips basically) use a crystal for precise carrier signal generation. If you are not very unlucky the crystall will have 30ppm error or less. The base frequency then, can be 433.187 — 433.213 MHz. Also the modulation of the signal (GFSK with

The story does not end here however, the receiver also has a crystal ! And this crystal can have the oposite ppm error than the transmitter. For example :

Consequently the receiver needs a «window» of +/-(433.213-433.159) or +/-54Khz or 108KHz «BWchannel» as CC1101 documentation calls it. This is about the setting in this library (101KHz). Generally is not a good idea to use a larger than needed BWchannel setting, as the chip then collects a lot of noise, and signals from other ISM working devices. For 868 band the required «BWchannel» is somewhat higher but at the moment this lib does not change the setting. RFstudio (TI’s software) has some preconfigured settings with this BWchannel, and they know better. A function tweaking the BWchannel may be added if such a need(reception problems) arises.

Even then, expect some disturbance from unrelated nearby devices. For example some garage doors use 433.42MHz +/- unknown ppm

Another consideration is which ISM band to use: Should we choose 433 or 868MHz ? (And there are more) Both seem to be allowed in Europe. Some 868 sub-bands allow 25mW or even 500mW. This is actually not good for us, as CC1101 can transmit only 10mW and the module will compete with higher power modules. Others say that 868 is in fact better, and that 433 is more crowded. Note that the antennas do not perform the same on every frequency. And finally the rules for frequency and power/time allocation are somewhat complex. You have to do your tests to be sure, and read the rules for your country.